After the Battle Of Trafalgar (1805), the relationship between Spain (which had previously declared war on France in 1793 and then an alliance in 1795) and France soured.

In 1807, Spain was in turmoil, due to infighting between their disinterested Bourbon king Charles IV, his son Ferdinand and the Spanish Prime Minister (also the not-so-secret lover of Queen Marie Louisa), Manuel de Godoy. They turned to Napoleon for assistance to sort out their affairs. Already having occupied Portugal (because they refused to join the Continental System) Napoleon moved his forces into Madrid.

He didn’t count on one thing – the Spanish peasants. The resulting war is where the term “guerrilla” warfare was invented (guerra in Spanish means war and -illa means small – i.e. guerrilla warfare is fought with small, insurgent troops instead of large traditional armies). 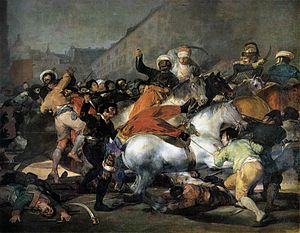 The Peninsular War saw an alliance of Spain, Portugal, and Britain battle the French Empire for control of the Iberian Peninsula. It lasted from 1808 until Napoleon’s first abdication in 1814. In this episode we provide an introduction and some background to the war.

The Peninsula War
Map of the Iberian Peninsula
The Continental System