Welcome to the tragic Episode 18 of the Napoleon Bonaparte Podcast here on The Podcast Network.

Once again, David and I would like to thank everyone for the wonderful feedback and comments we have received since the last episode. We both really appreciate it and it’s added motivation to keep producing the show although, as you know, we have so much fun being Napoleon geeks together that the entire British navy couldn’t keep us away!

Speaking of the British navy…. this episode is about the Battle Of Trafalgar. 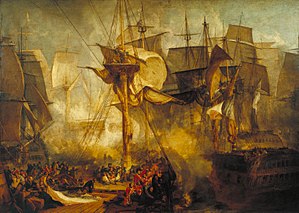 To get a good idea of what naval battles in the early 19th century must have been like, we both recommend watching the 2003 film by Australian director Peter Weir,
Master And Commander.