On this marvelous 17th episode, recorded almost 200 years after the actual events occurred, we examine the final months of the “Fourth Coalition” leading up to the “Treaty of Tilsit”.

Russian forces, lead by Count von Bennigsen, were crushed by Napoleon’s army at Friedland on June 14, 1807. 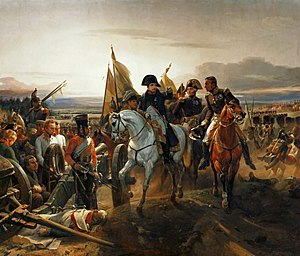 Three days later Russia asked for a truce. By the Treaties of Tilsit in July 1807, France made peace with Russia and forced Prussia to give up half of its territory to France, Jerome Bonaparte‘s Kingdom of Westphalia, and the new Duchy of Warsaw.

Napoleon was virtually in control of western and central Europe. Some historians consider Tilsit to represent the pinnacle of Napoleon’s career. He had conquered all of mainland Europe and secured peace for France. Unfortunately, it was to prove short-lived.

We also talk briefly about Talleyrand‘s resignation from his position of Minster of Foreign Affairs after Tilsit and hint at his role as a traitor to France (or was it just to Napoleon?) in the years to come.

Next episode – The Battle of Trafalgar!

The theme music is La Marseillaise.

#17 – The Battle of Friedland and the Treaty of Tilsit November 29th, 2019cameron
Tagged: Podcast